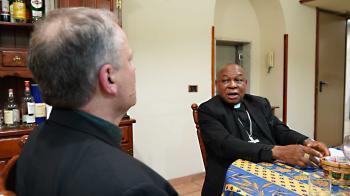 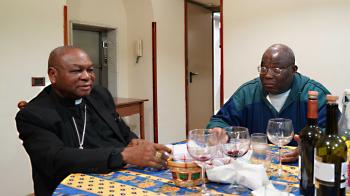 On February 13, 2019,  the  Oblate Community at our General House in Rome had the honor and privilege to receive the visit of his Eminence John Cardinal Onaiyekan, the Archbishop of Abuja. Almost all the members of the Community were present.

There was a sense of joy. We are happy that he found time to visit our small community. We share some memories of the special visit, which was in two phases.  First, his Eminence presided at our community evening Mass.  Then, he had dinner with the community.

At the Holy Mass the Rector, Fr. Dave Nicgorski, OMV,  welcomed the Cardinal and thank him for honoring the invitation to visit our community.

During the homily, Card. Onaiyekan said that the Holy Mass is a celebration where,  every day, we say and do "ordinary things"  -- repeating the same words and gestures.  These never make us bored but joyful – for through these same words and gestures we receive extraordinary gifts and divine favors. Indeed, we look forward to celebrating the Mass again and again. He recalled the importance of respecting liturgical norms and avoiding liturgical abuses. Under the guise of doing "ministry," some priests exhibit ignorance and misguided ideas of the art of liturgy. What the Church needs, according to him, is inculturation. His homily was spiced with a good sense humor.

During the fraternal conversation at the dinner, the Cardinal offered enlightening message and the eye-opening insights, while we spoke on a wide range of issues.  We talked about the  value and meaning of African names;  about some aspects of  the African Spirit world;  the separation of the African independent churches  from the Catholic Church; the  lessons we could learn from that historical happening in the early 20th century in Nigeria which today we call inculturation; religious priestly vocations and admission into formation houses, including the suitable age of admission, the   choice to  admit applicants at young or adult age and the merits and demerits of either choice, and the question of availability of funds.  He says that the Oblates in Nigeria would be capable of admitting and sustaining more Nigerian applicants, considering that Nigerian Catholics are generous and are willing to support this initiative. He mentioned the possibility of opening of religious communities in African countries outside of Nigeria; he spoke about the election and counting of votes in Nigeria. Responding to one of the several questions, his Eminence also showed a  good memory about some of the lecturers at the Pontifical Biblical Institute, Rome, including the late Cardinal Carlo Maria Martini, SJ.

Even when the conversation concerned important matters, his Eminence put everyone present at ease through his wit,  his jovial spirit,  and his welcoming attitude.  Our community meals are  usually a time of fraternal sharing that is joy-filled and relaxed.  The presence of the Cardinal contributed to making our dinner even more joyful.  Additionally, we saw this as a formative moment with a master who helped us appreciate our Catholic faith and African cultural values.

The members of the Oblate Community at the General House are grateful to Card. Onaiyekan for his visit, availability,  simplicity and joy in sharing with us his wisdom.

Oseni  Ogunu, OMV
See Other News & Events »
Follow Us:
Support Us
How can I support the mission of the Oblates of the Virgin Mary?
Specifically, this means supporting someone to be empowered – to see, to hear, to speak or walk again, to feel well in themselves both physically and spiritually, to participate in education, in the society and to earn their own living...

Designed By Verbum Networks, Nigeria
Copyright © 2018. All Rights Reserved.
Nigeria Delegation of the Oblates of the Virgin Mary (OMV)